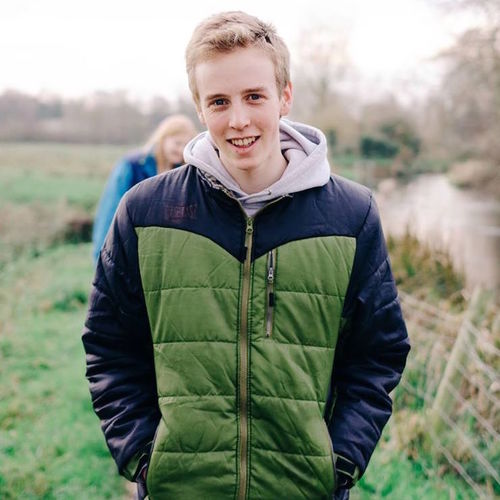 I'm a History graduate (Class of '17), and probably about as British as anyone gets. I like to understand things, so read far too many Wikipedia articles.

4 But because of his great love for us, God, who is rich in mercy, 5 made us alive with Christ even when we were dead in transgressions—it is by grace you have been saved.

I have never strayed too far over the line. In fact, I would go so far as to say that, in many ways, if I were not a Christian I probably wouldn't look too different to how I do today. I doubt that I would have gone ‘off the rails’ at uni, I suspect my grades would be quite similar and I may even still have gone to church. This last point, though, is the one I find most shocking, even if reading this you don't think so. Hopefully by sharing some of my story I can explain a bit why I believe this to be the case.

I grew up going to church, most of my friends were from church and, if I had the choice, I would choose to spend time with my church friends over my school ones. I rarely missed any events the youth group held and would join in all the games whether I enjoyed them or not. What’s more, when I got to the age that people started going to church independently of their parents, I kept going, never intentionally missing a week. I would pay attention to what was said and would be one of the first to answer any questions about what I’d learnt. Every summer, the highlight of my year was to go off to Christian camps with my friends where, again, I would enjoy myself, whilst not stepping too far out of line. I was always one of the most attentive ones there, and I had all the right answers when I needed to give them.

Of course in all this I wasn't perfect; I still messed around with my friends and from time to time we got into trouble. But I was usually the one who would say that what we were doing was a bad idea or just run away. You get the picture. I was scared of upsetting the leaders at church, my parents or anyone else by being too rebellious so I just kept living this ‘good’ life. My thinking wasn't driven by what God thought: I simply didn’t want people to be upset with me.

The most confused part of all this, though, was what I was really thinking. The short answer to that question is that I simply don't know. It certainly wasn't trying to run away from God; I understood the message of Christianity and would definitely have called myself a Christian, but I REALLY WASN'T.

But God changed that when I was 14. He shook me and showed me that I needed to fully accept and believe in Him and turn to Him in prayer as the answer to my problems because He was the only one who could deal with them.

I needed this as, regardless of my behavior, I was still acting in disobedience to Him and had not addressed the biggest problem in my life: I had pushed Him out of the picture.

I needed Him to forgive me whether I knew it or not, and I was only able to do this through Him reaching out to me. From that point my life changed from my heart – which was the true expression of who I was. Regardless of what my actions had showed up to that point, my heart had been wrong and this would have had terrible consequences had God not reached out to me.

As I got at earlier, my unthinkingly going to church wouldn’t solve this problem; it was an entirely pointless exercise. I had my priorities completely wrong, I was not a Christian no matter how hard I tried to look like one and that is a scary thought. As I said at the start, I feel that I could have carried on living as I did, with me and maybe also others around me thinking I was a Christian, but I cannot be more grateful to God for waking me up to this fact and allowing me to truly choose to love and follow Him.

I began to understand what church really meant, why it isn’t a chore but a joy, and what it meant be able to engage with it properly and rightly; I started to live the life that God wanted me to live, that was driven by how I viewed Him, not by what I just decided was the best course of action. As time has progressed I have learnt more and more what it means to be a child of God. Particularly during my time at LSE my faith has grown enormously, I have learnt so much more and become even more convinced of the truth of Jesus, as I have been surrounded by Godly friends and I have seen Him so clearly at work in my life.

I am now able to appreciate how meaningless my life was before I was a Christian: it was driven by the desire to be relatively good for no real reason and I think I was happy enough living like that. Now, though, my life has an eternal purpose which simply cannot match anything else I felt or thought before that. So, to relate back to how I began this story, my life looks the way it does because I now know God and make choices that reflect the fact that I know that He loves me.

To live as I did without Him was futile: I might as well have lived more visibly as the rebel I was. God is the building block of my life now and I live for Him. Before I foolishly lived under a church-going-good-behaving facade which meant NOTHING. I hope by sharing my story I can show that Christianity is something that comes from the heart, and that, that it is not a set of actions that someone blindly follows. Maybe you can relate to this and have lived ‘nicely’ but have never truly encountered God, or maybe the person I was before I was a Christian is what you thought it meant to be a Christian. I can assure you that it isn’t; actions mean nothing if they aren't backed up by FAITH.