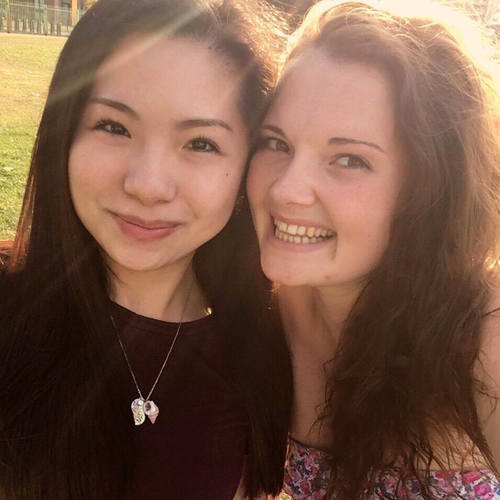 (I'm the one on the left)
MSc student (Media & Communication Governance) (2016/17)
Lived in Hong Kong, New Zealand, and France before London.
My coffee choice is always extra hot mocha!

'You make known to me the path of life;
you will fill me with joy in your presence,
with eternal pleasures at your right hand.'

‘You have made us for yourself, and our hearts are restless, until they can find rest in you.’ – St. Augustine

Perhaps like many of us, I had always felt an unexplainable void in my heart – an emptiness that I didn’t wish to expose to anyone but, at the same time, could find no way of filling.

Until I met Him.

I started attending Catholic schools from kindergarten. It didn’t make much sense to me when I was younger, but I would often find peace whenever I sat in the school chapel; somehow I became convinced there was a higher being ‘out there’ who was with me, but I didn’t know who He was. I suspect the main reason for this was that, to me, Christianity seemed to be a one-way religion. It was about memorising Bible verses correctly, repeating liturgical prayers, and following rituals that were supposed to make me ‘alright’ with some ‘God’. It was nice to be a part of ‘it’, though I wasn’t quite sure what ‘it’ was. Deep down I still felt there was something missing.

Things started to change when I met Him in a church in Hong Kong; or I should say, when He met me. The way people lived and worshipped God there was very different to what I was taught in school. They were contented, spirited, alive – all because of Jesus. But who was this person? What did I have to do to have a real relationship with Him like these Christians? I began to ask lots and lots of questions about God, Jesus, and the Bible throughout that year. Slowly, I began to understand that God had long decided to love me before I knew Him, ‘For He chose us in Him before the creation of the world to be holy and blameless in his sight. In love.’ (Ephesians 1:4). I realised that it was not about what I did to be ‘righteous’; it was about faith in His love for me, proven in His sacrifice on the Cross even when I was still oblivious of it! When I was 15, I became the first in my family to be baptised as a Christian.

Funnily enough, it wasn’t the remedy I was looking for. Yes, my knowledge of Christ increased and yes, I started to have a personal relationship with Him and a confidence that He would listen and speak to me, but the void inside me was only temporarily filled. My habitual thinking was that this void could be filled by new places: I believed that, if I moved somewhere new, I could have a new life, all my existing troubles would disappear and my heart would be satisfied. So, I moved to New Zealand for university – as far away from home as possible. At first, it worked! I had a new life and I could do whatever I wanted. I was tempted to believe that there was no particular need for God when I could be fulfilled by people and things on earth.

Unfortunately, reality soon set in. People disappointed; things failed. I didn’t want to trust anyone again because people who said they would stand by me changed, left, and fell through on promises they had made. I couldn’t find meaning in my new life anymore when the excitement had passed. For a period of time, I felt lonelier than ever. Despite my wandering, God rescued me from this dark place. He was the only anchor I could hold onto. As I realised I had nothing except Jesus, I opened up to spend more time with Him, reading His Word, praying, worshipping, sometimes even just being still in His presence. It was then that I fully understood that I needed nothing but Jesus.

He encouraged me to be involved in a local church, Elim, where I once again encountered the goodness of God that no human being, no physical place could provide. I also joined the Tertiary Students Christian Fellowship of New Zealand, where I developed precious relationships with God-loving friends and mentors who constantly brought light into my life. More so, my minor in Theology studies challenged my faith to a large extent. I’m a person who cannot just follow what people say until I have delved into the stories myself. Studying Theology allowed me to engage with the Christian story much more holistically and to raise relevant questions. At times, I was worried that these questions would threaten my faith. What if God failed? Well, He never did. Faith is both head and heart knowledge. The Holy Spirit revealed to me that in God, there’s always truth, and His truth would set me free (John 8:32).

Fast-forwarding my story, I moved from Dunedin to Auckland where I worked for a short while after I graduated. From Auckland I then moved to London, where I am now studying a Master’s degree at the LSE. Every time I move, I am reminded that the journey itself is not a god. My Saviour is the One who walks with me through these different journeys.
I could move a thousand times and still be empty. Nothing on earth can fill the void in me because I’m made for eternity (Ecclesiastes 3:11). The real life is not a new life in a new place, but a life laid down before the Cross just as He did, to be made anew by Him in His grace every day.

The truth, I’ve found, is that to have a real life is to know that God’s love is the ultimate satisfaction for my heart. He is my Heavenly Father. He sent His only Son to die for me so that I could enjoy the real freedom of being forgiven. He never fails.